Following the first multi-messenger analysis combining data from my two main collaborations, i.e. H.E.S.S. gamma-ray observations and neutrino observations from the ANTARES neutrino telescope and observations directions of of archival IceCube neutrinos (see below for details), the multi-messenger program of H.E.S.S. has been moving into the time domain since early 2016. Following the installation and commissioning of a multi-purpose alert reception system at the site of the H.E.S.S. experiment (e.g. C. Hoischen, Baikal 2016 workshop), we connected the data acquisition system to both the IceCube and ANTARES neutrino telescopes. Every time a particular interesting neutrino event is recorded by these instruments, an alert message is exchanged immediately. After automatic and rapid analysis of these alerts, the H.E.S.S. telescopes are (without human intervention to avoid delays) directed into the direction of the detected neutrino(s).
Several observations following these multi-messenger alerts could be obtained starting early 2016. I provided a first report at the AMON workshop 2016 (Cochem/Germany). A more complete picture of the current status of these searches have been presented at the 35th International Cosmic Ray Conference (ICRC) in July 2017 in Busan/South Korea. The proceedings can be found on the arXiv:1708.00466

While the exchanges between observatories relying on automatized alerts is an important step in improving the reaction times of follow-up observations, additional tools are necessary for scientists to keep up with the ever increasing flux and complexity of alerts from the transient sky. In various iterations I have been developing such tools and platforms over the past years. See the dedicated page for a detailed description of Astro-COLIBRI.

The first successful direct detection of gravitational wave by the Ligo interferometers opened a new window to the universe in 2015/2016. This breakthrough is opening a new window to the universe and completes the multi-messenger picture of particles and radiations available to access the high energy univers.
The H.E.S.S. collaboration is part of the extensive electromagnetic follow-up group installed by the VIRGO/Ligo collaboration. The large localisation uncertainties of the gravitational wave events, which reach hundreds and even thousands of square degrees, require dedicated follow-up strategies. An outline of current strategies, implemented within the general, automatic alert reception system mentioned above, is being developed by my PhD student, Monica Seglar-Arroyo. An illustration of the performance of the coverage achieved for a simulated gravitational wave event is shown in the right plot below. See Monicas talk at Rencontres de Moriond VHEPU 2017), the proceedings with more details is available at ​arxiv.org/1705.10138.
In August a breakthrough was achieved with detection of gravitational waves from the merger of a binary neutron star system GW170817 followed by the detection of the associated electromagnetic radiation (GRB170817A and its subsequent kilonova). Thanks to our preparation, we could trigger H.E.S.S. observations only about 5min after the localisation of the GW event by Virgo and Ligo was published and obtained the first ground based observations on the event. The results of our observations have been published in H. Abdalla et al. 2017 ApJL 850 L22. Some more details on this significant event which is marking the birth of multi-messenger astrophysics can be found here:
Localisation uncertainty of the first two gravitational wave events detected by the Advanced Ligo interferometer. Plot modified from G150914 and SkyMap Viewer. Right: Potential coverage of H.E.S.S. observations of a simulated gravitational wave event (color scale illustrating the localisation uncertainty) derived with a dedicated, optimized scheduling algorithm. Work done together with my PhD student M. Seglar-Arroyo (see Rencontres de Moriond VHEPU 2017 and ​arxiv.org/1705.10138).
Over the following years since this first breakthrough observation, the algorithms and procedures used for an optimal scheduling of follow-up observations of GW events have been continuously improved. Led by my PhD student H. Ashkar, a fully automized system has been implemented within the data acquisition and transient system of the H.E.S.S. experiment. It is described in detail in the following publication: H. Ashkar et al., "The H.E.S.S. Gravitational Wave Rapid Follow-up Program", JCAP 03 (2021) 045; arXiv:2010.1617
We successfully used these procedures to conduct several follow-up observations of GW events detected by the Ligo and VIRGO interferometers over several years (covering the science runs 02 and O3). The results have been published in: H. Abdalla et al. (H.E.S.S. Collaboration), "H.E.S.S. follow-up observations of Binary Black Hole Coalescence events during the second and third Gravitational Waves observing runs of Advanced LIGO and Advanced Virgo", ApJ, 923, 109 (2021); arXiv:2112.08307
A description is also given in this blog post: Hunting for the gamma-ray counterparts to binary black hole merges

Following the analysis outlined below and the discovery of an astrophysical flux of high-energy neutrino by the IceCube observatory, I initiated the first multi-messenger program within the H.E.S.S. collaboration. Over the years 2015-2016, several regions identified by IceCube have been observed in high-energy gamma rays. The aim of these searches is the localisation of a joint source of both neutrinos and gamma-rays, as this would be strong hint for the presence of a hadronic cosmic ray accelerator. The observed regions are illustrated below. Unfortunately no strong gamma-ray emission could be found so far. Detailed analyses of the obtained data and especially their interpretation in terms of limits on the neutrino sources are in progress and were presented at the ICRC conference (07/2017, Busan/South Korea). 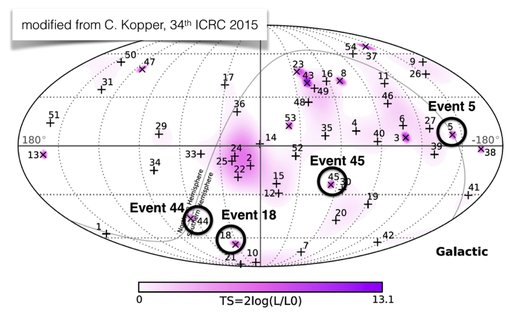 Reconstructed directions of high-energy neutrinos observed by IceCube (from C. Kopper, ICRC 2015). During 2014/2015 H.E.S.S. observed several of these directions searching for high-energy gamma-ray emission from the same regions. I reported the results of these searches at the 34th ICRC (2015, The Hague) and the 6th Gamma-Ray Symposium (2016, Heidelberg).
Following the analysis outlined below and the discovery of an astrophysical flux of high-energy neutrino by the IceCube observatory, I initiated the first multi-messenger program within the H.E.S.S. collaboration. Over the years 2015-2016, several regions identified by IceCube have been observed in high-energy gamma rays. The aim of these searches is the localisation of a joint source of both neutrinos and gamma-rays, as this would be strong hint for the presence of a hadronic cosmic ray accelerator. The observed regions are illustrated below. Unfortunately no strong gamma-ray emission could be found so far. Detailed analyses of the obtained data and especially their interpretation in terms of limits on the neutrino sources are in progress and were presented at the ICRC conference (07/2017, Busan/South Korea).
"Multi-messenger observations of a flaring blazar coincident with high-energy neutrino IceCube-170922A”

The first source of high-energy neutrinos?

On 22 September 2017 we detected a high-energy neutrino, IceCube-170922A, with an energy of ~290 TeV. Its arrival direction was consistent with the location of a known gamma-ray blazar TXS 0506+056, observed to be in a flaring state. An extensive multi-wavelength campaign followed, ranging from radio frequencies to gamma-rays. These observations characterize the variability and energetics of the blazar and include the first detection of TXS 0506+056 in very-high-energy gamma-rays. This observation of a neutrino in spatial coincidence with a gamma-ray emitting blazar during an active phase suggests that blazars may be a source of high-energy neutrinos.
​A detailed description of the event and its interpretation can be found in my blog entry: Neutrino multi-messenger astrophysics: another revolution !?!

A first gamma-ray follow-up of a neutrino hotspot

In 2012, the ANTARES collaboration, of which I am a member ;-) presented a search for point-like high-energy neutrino sources. The paper can be found here: The Astrophysical Journal, Volume 760, Number 1
In this search a region of interest has been identified because it showed an increased flux of neutrinos with respect to the average flux seen in the overall skymap. With 2.2 sigma above the background hypothesis, this excess was not highly statistically significant. Nevertheless it was interessting enought to cause some discussion in the field and led me to propose observations of the region with the H.E.S.S. Imaging Air Cherenkov Telescopes. The proposal was accepted and the requested data was taken in summer 2012. Unfortunately no high-energy gamma-ray emission was found from the region. I presented the analysis and interpretation of the data on behalf of the H.E.S.S. collaboration in summer 2013 (“Multi-wavelength study of the region around the ANTARES neutrino excess”, 33rd International Cosmic Rays Conference, arXiv: 1307.6074).
Although no multi-messenger source could be detected, I realized that already very short observations (2h in this case) with high-energy gamma-ray observatories in conjunction with source scenarios put forward by high-energy neutrino telescopes allow us to  constrain hadronic cosmic ray acceleration scenarios. In the end these experiences led me to join the H.E.S.S. collaboration to pursue these studies. See ﻿Gamma-ray astronomy﻿ for more details.

Significance map of H.E.S.S. gamma-ray data taken in the region around a neutrino excess observed with the ANTARES neutrino telescope (left panel). The derived upper limits on the gamma-ray flux are ruling out the existence of a source emitting neutrinos and gamma rays with equal luminosity (middle panel). By matching the ANTARES flux with the upper limits obtained with H.E.S.S. and taking into account EBL absorption effects, lower limits on the distance of the potential source could be derived (right panel). From F. Schüssler et al. on behalf of the H.E.S.S. collaboration, 33rd ICRC 2013.