Fast Radio Bursts (FRBs) are a relatively new class of very brief, yet extremely powerful transient phenomena observed in the radio domain. A summary of known FRBs including the details of the observations can be found in the online catalogue FRBcat. H.E.S.S. is participating in the search for FRB counterparts at other wavelength (other than radio) via a collaboration with major radio facilities around the world like the Parkes and the UTMOST telescopes in Australia or the MeerKAT observatory in South Africa. Over the last years, several alerts have been exchanged between the partner collaborations and subsequent follow-up observations with the H.E.S.S. TeV gamma-ray observatory could be obtained. Some of the recent results are illustrated below.
Fun fact: although never being mistaken for FRBs, an additional category of very strange radio bursts ("perytons") have been observed by the Parkes telescopes over several years. The SUPERB team was finally able to track down their origin: a microwave oven in the Parkes kitchen! Their paper is a really fun to read, also don't miss the article on The Conversation.
In May 2020 a significant breakthrough in our understanding of FRBs was achieved: for the first time a Fast Radio Burst could be linked to an X-ray burst from a magnetar, SGR 1935+2154. Details are given in this blog entry.

Identification of the host galaxy ?

A particular interesting FRB has been detected on 18th April 2015 by the SUPERB team at the Parkes telescopes. Following the detection, the ATCA array was able to detect a radio afterglow signal from the direction of the burst lasting up to 6 days. This signal is shown in the figure below as black squares. Optical follow-up observations allowed to link it to an elliptical galaxy at a redshift of z=0.492  (WISE J071634.59-190039.2), which, if confirmed, would be the first identified FRB host galaxy. Further observations of the region have been obtained after the publication of the initial results with a variety of instruments. A selection of them is shown in the figure as well. As illustrated, renewed radio activity from the region has been found almost a year after the burst and thus raised doubts on the connection between the FRB and the radio afterglow.

The first limits on the TeV gamma-ray afterglow!

H.E.S.S. follow-up observations could be obtained about 14.5h after the FRB as soon as the necessary darkness conditions were fulfilled. In 1.4h of data, no significant gamma-ray afterglow emission could be found. Integrating above the threshold of 350GeV we derived an upper limit on the gamma-ray flux to F(E>350GeV, 99% C.L.) < 1.33 x 10^-8 m^-2 s^-1, assuming a generic E^-2 energy spectrum. It is shown as red marker in comparison to the other observations in the figure below. I summarized the results (which are the first ever limit on the gamma-ray afterglow of fast radio bursts) in the following paper: H. Abdalla et al. (H.E.S.S. and SUPBERB collaborations), A&A 597 (2016) A115 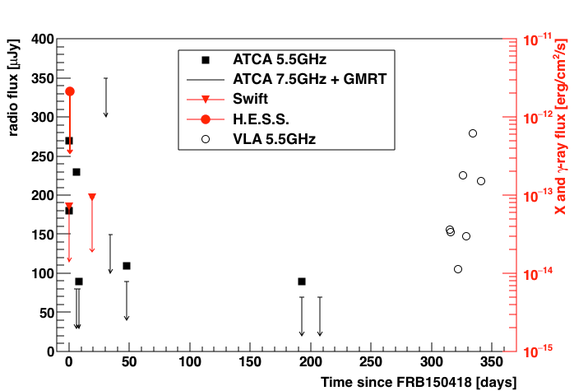 Another Fast Radio Burst that has been followed by the H.E.S.S. in a search for TeV gamma-ray afterglow has been recorded in Feb. 15th, 2015. In contrast to most other FRBs it showed a significant polarisation (43 +- 5%) of the radio signal recorded by the Parkes telescopes. Although coming close due to the Galactic plane (~25deg from the Galactic Center) the rotation measure, an estimate of the electron column density, is compatible with zero: -9 < RM [rad/m^2] < 12 at 95% C.L. This indicates that at least this burst was not produced in a dense, magnetized environment as suggested by previous observations. Observations covering the full electromagnetic spectrum didn't reveal any transient or variable emission.
I was responsible for the analysis of the data taken with the H.E.S.S. array and the relevant sections in the joint published by the Parkes involved observatories. The paper has recently been accepted by MNRAS and is available here: E. Petroff et al., "A highly polarized fast radio burst at low Galactic latitude", accepted by MNRAS
A search for a neutrino counterpart has been performed with the ANTARES neutrino telescope. Scanning the recorded data in various time windows of up to one day before and after the burst, no neutrino candidate could be identified.
Fun fact: being a member of two of the participating collaborations, H.E.S.S. and ANTARES, my name appeared twice in the joint authorlist, something that was apparently not foreseen by the journal. As I signed responsible for the H.E.S.S. analysis and being less involved in the analysis of the ANTARES data, I finally signed  the paper only on behalf of the H.E.S.S. collaboration...